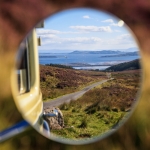 ‘But Luxembourg is in the opposite direction??’ Correct…but this time we planned to pick up the new old car in a different way. Since the old Lady had not done a lot of miles during the past years (actually decades…), we did not want to push our luck too hard by driving all the way home. But having her picked up by a commercial trucking company? Boring and rather expensive – and no challenge for someone working in the logistics sector. So we forged a plan for a more unusual trip… 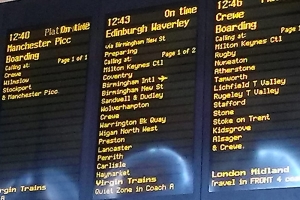 Another flight to London City. Even though travelling with a suitcase of the size of Norway, I had literally only space for a tooth brush as the lion’s share of the available space was reserved for tools, a water-proof car cover and other essential things to pamper the car. Who cares about the driver anyway? Huge Steamer trunks are just not made for the London Underground, so I was quite breathless when finally reaching my ‘Virgin Train’ to Birmingham. ‘Hello gorgeous’ – at least the warm welcome made up for the umpteen stairs in the Underground, struggling under the weight of the suitcase. With a smile I thought of the famous ‘Senk ju for trävelling Deutsche Bahn’ announced in the trains at home. Onward to Wales on board a small Diesel Train – and soon, after a trip that felt like travelling around the globe, we stood again in Edmund’s wooden dream garage. 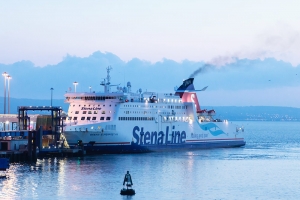 The paperwork was quickly done and soon I found myself behind the large steering wheel, which would do honour to an ocean liner. The familiarisation with the preselect gearbox was successful after a few miles, so that I could say goodbye to Edmund, who had escorted me for a while. ‘All by myself’ now… Scorning the roads leading towards the Channel, I followed the Sphinx mascot on the radiator in northerly direction. Just before sunset we reached the port of Birkenhead, opposite Liverpool. Following a modern Maserati (‘he has 400hp, you better stay behind him’) we embarked the ‘Stena Lagan’ to Belfast. A brief glimpse from the ferry onto the lights of Liverpool at night concluded the day and soon the cozy berth engulfed me and my dreams of old cars… 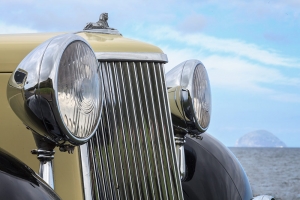 In the wee hours of the morning we reached Belfast and touched the soil of Northern Ireland for the very first time. Although only for an hour, as our taxi to Scotland, the ‘Stena Superfast VIII’ had just arrived. And only 2 1/4 hour later we moored in Cairnryan. 300 miles of boring motorway had been replaced by a sunny, comfortable mini cruise…the old Lady seemed to enjoy the voyage to her old home Ayrshire as well, humming nicely along the coastal road towards Glasgow. 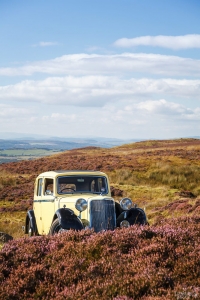 It was a tremendous pleasure to meet our Scottish Riley friend Gordon again, who had already led us to the finest roads off the beaten track when we last visited Scotland with our Riley two years ago. And yet again he had some nice surprises up his sleeve: Tiny, winding roads, making us forget that the metropolis of Glasgow is just half an hour away. And a free workout for the arms was guaranteed as well thanks to the many tight turns. A highlight (also literally speaking) was the steep Moor Road from Fairlie to Dalry. I could have been sitting for hours on the Siddeley’s running board, enjoying the view on moorlands and islands. Gordon likes to emphasise that he lives in the most beautiful corner of the whole world. In moments like these there is no place for denial…

For 30 years, our old Lady Primrose was living in this area, being owned by a Scottish Clan Chief. Sadly the previous owners were travelling, so we visited the castles of Dunure and Culzean (pronounced ‘Kill-ain’ as I learnt) on the shores of the Firth of Clyde instead. Regardless whether in small harbours or in front of picturesque ruins, the Siddeley was often photographed by passers-by and proudly served as ambassador for the Scottish Tourism Office. 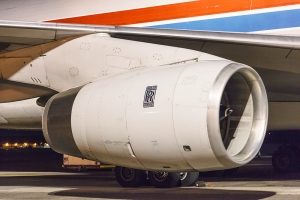 But even the most perfect, long and sunny weekend in Scotland comes to an end. Time to think about the way home, which is now longer than at the outset in Wales. Befitting the Siddeley’s aristocratic standing, a single Rolls Royce seemed not to be adequate to carry the Lady back home, so we opted for four of them. No, no lottery jackpot involved… but a half-way affordable option for an air cargo employee to fly a car to Luxembourg on board a 747 freighter. Stand-by and subject to space availability of course, so the suspense remained until shortly before departure if the car actually gets on… 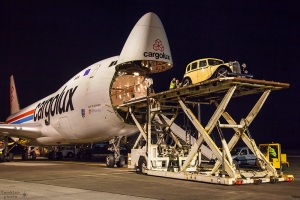 In the early morning hours the Siddeley was lifted on a highloader and swallowed by the Boeing 747. A reminiscence  of the cross-channel air ferries of Silver City Airways … In 1948, the first car to be carried on board their Bristol Freighter from Lympne to Le Touquet was also an Armstrong Siddeley, the Lancaster of the company’s managing director, Air Commodore Griffith ‘Taffy’ Powell. Well, today the aircraft was significantly larger. Despite the very long day – 22 hours with no sleep – the unique cocktail of adrenalin, endorphin and kerosene kept me awake until shortly after takeoff…

In the twilight hour, shortly after 6 o’clock in the morning, we touched down in the little Grand Duchy. And later on the same day the old Lady saw continental roads – presumably for the first time – after a tour of Wales, England, Northern Ireland and Scotland. Now she sits patiently in the garage, waiting for a complete service and the local MOT. We are already looking forward to many happy miles with our new old Primrose, although she will now see more of the Eifel instead of the islands…

As usual the image gallery concludes this  blog post…to enlarge just click on the thumbnails.

A big thank you to the phantastic CV teams in Prestwick and Luxembourg! Without your great support this trip (“Sphinx by Air”) including photo permits and -opportunities would not have been possible!