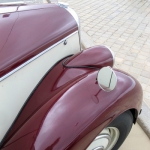 Another landing in London Heathrow. Two weeks after visiting Mike and his Riley for the first time, the alarm clock kicked us out of bed at an unearthly hour so that we could catch the (very) early first flight to London this time. At 8 am sharp a typical London cab drops us at the seller’s doorstep where our new old Riley named “Lady GoDiVa” is already patiently waiting to commence the long journey to Germany…

Mike had already loaded the boot with carefully boxed spare parts. After the bigger parts (spare engine, gearbox, front and rear axle,…) had dissapeared in the darkness of a forwarding company’s lorry, we received a quick technical briefing on how to operate the Riley. Time to say goodbye – after 22 years…and the very first miles for me with a 60-year old car – straight onto the M25!

Even though I was pretty well accustomed to driving a (modern) right-hand drive car on the left side of the road, the first encounter with the infamous London Orbital motorway M25 turned out to be the expected challenge. In the morning rush hour, not much of the otherwise typical British politeness (usually noticeable when queuing up at a bus stop, etc) was left. A speeding, braking, jostling wave of cars washed us in southerly direction. And as a refreshing bonus, a true deluge set in – pointing out that the old lady was not completely wateright…. Some years ago, Chris Rea had dedicated a song to the M25 – reassuringly titled “the road to hell“.
With white knuckles, wet knees and the eyes riveted on the spraying traffic ahead – as far as visible through the small area cleaned by the window wiper – I could grasp a little bit what Chris meant… 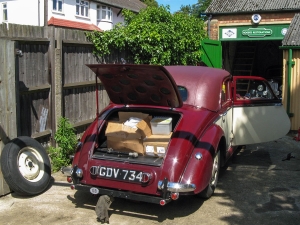 But not to worry…. we seemed to have missed the exit to hell as the rain gave way to beautiful sunshine when we left the M25 south of London and headed for Roger’s workshop for a thorough inspection before the crossing to Europe. Roger did not only have a cup of tea ready but also a set of new headlamps for European traffic and a hazard flasher switch, which is mandatory in Germany. In no time – nearly like a Formula 1 pit stop – the Lady was in the air with wheels removed for a brake check. Nevertheless, despite the hustle and bustle around our car, we used the opportunity to take a glimpse under the metal skin of some other Riley RM’s in different stages of restoration. Impressive wood work – let’s hope that the bones of our Lady are as solid as she appears to be! 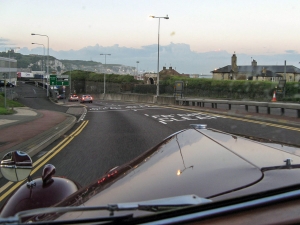 In the late afternoon, the Riley was back on her wheels, ready for departure to Dover. But we did not want to leave yet without enjoying a traditional pub meal before heading towards the M20 in Kent… which was probably the trigger for something that seemingly became common practice on later trips to the UK: we missed the ferry in Dover! Setting sail at dawn on board the “Seafrance Berlioz”, we reached the hotel in Calais shortly after midnight and literally fell into what felt like the most comfortable beds in the world. A very long day drew to a close… 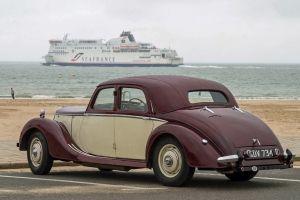 Needless to say that the sleep deficit took its toll on the next day. Our planned morning departure from Calais was sacrificed to put in some extra sleep. After lunch a final look (for now) back to the UK and off we went towards Germany, preferring cosy rural roads over the dull and boring motorway. Well.. after the 20th roundabout and 100th industrial estate, these rural roads seemed not to be that cosy any more. Despite all the best efforts I do think that the Pas de Calais will never be my favourite holiday region, desolé mes amis…So back on the motorway, at least it wasn’t raining this time. And the Riley felt like I had never driven any other car in my life… “Magnificient motoring” at its best! 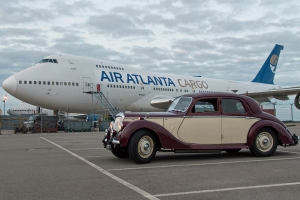 While stopping at a service area in Belgium, some German motorists were wondering about these strange Brits (i.e. us) with their old Rolls (i.e. the Riley). It is quite refreshing how openly people can speak about others, believing their counterpart would never understand them. Little did they know… Well entertained we continued our way towards the little Grand Duchy of Luxembourg and finally reached our garage. Mike had been absolutely right: The lady had mastered more than 400 miles without any headache. Trailering – pah, only for wimps. And the dreaded M25 is only a big parking lot anyway!

A few weeks later, our Lady GoDiVa had successfully passed the German MOT with no negative remarks and the Riley population of our town increased by one.

Well, actually “one” is not quite correct… 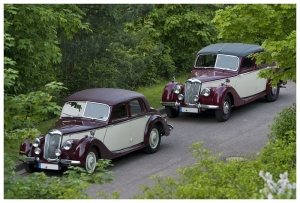 On the evening of our arrival, I quickly called our friend Jürgen to take a glimpse at our new car. Before I could even mention what it was, he said: “Oh, a Riley RM?“. Absolutely gobsmacking…. how on earth could he determine make and model of a car that is rather unknown in Germany? It turned out that he was in search of a RM as well, so far however without any luck. But that’s a totally different story and, without intending to reveal too much, I just put this preview picture in here…