It is a sunny Saturday in June. Perfectly on time at 1 pm we touch down at London Heathrow airport, where Roger, a knowledgeable expert of the British Riley RM-Club is waiting for me. I had been looking for a Riley RM for quite a while and had already viewed a few cars in Germany and Belgium. Today, we intend to see three more in the greater London area…

The Riley RM series (RM = Riley Motors) was built between 1945 and 1955 (extended by the “Pathfinder” saloon until 1957). Around 23,000 cars were built with two engine options – 1 1/2 and 2 1/2 Litre. Since the concept of a relatively sporty four-door saloon (1 1/2 Litre RMA/RME, 2 1/2 Litre RMB/RMF) had already been finalised at the beginning of the second world war, production could start immediately in 1945. Three years later a roadster (RMC) and a 4-seater drophead coupe (RMD) joined the portfolio, exclusively powered by the  2 1/2 Litre “big four” engine. 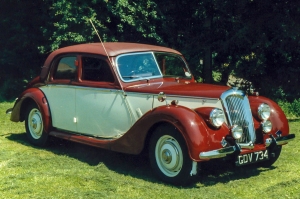 Not far from the airport, Mike, longtime owner of the 1947 Riley registered GDV 734 was waiting for us. He had already emailed a few photos of his maroon/ivory coloured Riley and it was love at first sight. Roger’s unerring view should ensure on that day that this love wasn’t blind…
GDV 734 had originally been delivered to a hotel owner in Salcombe/Devon; from the late 1960’s onward she spent several years in a barn and was completely restored in a garage in the early 1980’s. Since then, the Riley had been with her current owner, who reluctantly offered her for sale after 22 years due to health reasons.He had given her the name “Lady GoDiVa” as a reminiscence of the former Riley factory in Coventry and the registration plate.

Now, said lady was standing in front of us. 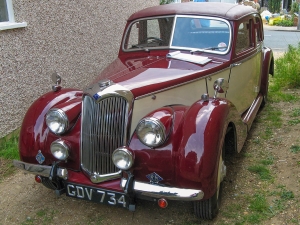 An object of desire for me, she was, as her nickname suggested, virtually naked for Roger’s expert inspection. No “matching numbers”, thus of little interest for a collector. The original black colour had given way to a contemporary two-tone paint scheme with maroon (instead of black) vinyl roof more than 20 years ago, which showed some signs of age. Nevertheless, from what could be seen the lady seemed to enjoy a rather healthy body structure and was technically in good nick. Countless invoices of the past 20+ years evidenced the meticulous maintenance done by a renowned Riley specialist. A large pile of spare parts accompanied the car. 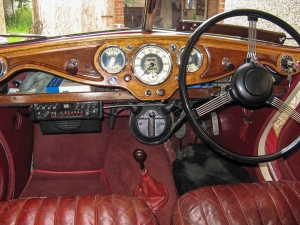 The original interior had this lovely smell of old leather; even a working HMV valve radio from 1947 was installed. Following a thorough inspection, Milke invited us to an extensive test drive through the suburbs of London. It seemed to be indeed the “love at first sight”, but quoting good old Friedrich Schiller’s poem “Song of the bell”: “Whoe’er would form eternal bonds should weigh if other cars respond” (yeah, beat me for this translation…). After all there were still two more Rileys waiting for us on that day…

The other two visits went quicker than the first one. Both were generally OK, but had some issues that Roger noted on his pad. We compared notes in the evening at the hotel bar and found out that Roger’s expert view was largely in line with my layman’s impressions. He mentioned a few things to observe with GDV 734 and reminded me that it would certainly not be the right car if I was looking for a perfect collectible with matching numbers. While Roger headed home I remembered another line in Schiller’s poem: “Folly is short — repentance long.”… 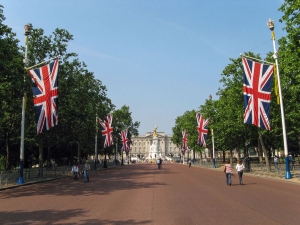 On Sunday I used the time before the return flight for an extensive promenade through the heart of summerly London. The streets were regally flagged for a parade and seemed to tell me that I should not return home without a British car. “Forget about the flight with unappealing sandwiches and tasteless tomato juice. Enjoy the legendary ‘magnificient motoring’ that only a Riley has to offer. Right here, right now!”

No no no…. a responsible person, even a number cruncher cannot be impressed so easily by pure gut feeling. After all, everything has to be rethought in detail and there are still so many other Rileys. And at the end of the day, does one really want and need such an old car in today’s traffic? No no, not that quick my dear…

One day later I was reading the text of my email to Mike one more time. The main message was relatively brief: “We’ve got a deal!”. I pushed the “send”-button and leant back. Who was this Schiller bloke anyway, and what did he understand of old cars..?

One thought on “Searching for a Riley…”