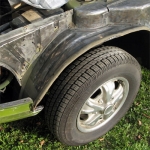 Oh, disturb it not! A line from a German poem written by Emanuel Geibel. Maybe I should have taken it to heart? But I was young, stupid and inexperienced – and the Ro80 showed some blemishes that I wanted to fix. It began with a few rust spots on the front wings. Luckily these turned out to be harmless as the corrosion was only superficial. However, at close examination, a few unwelcome issues came to light. Nothing for the faint-hearted…

The front ends of the sills wer literally screaming for attention. Strangely enough I had double- and triple-checked these notorious rost spots at every Mercedes that I had visited, but in the case of the Ro80 the nicely tarnished wax-oiled underneath had given such a healthy impression. Warranting solidity like a rock in the evening sun. 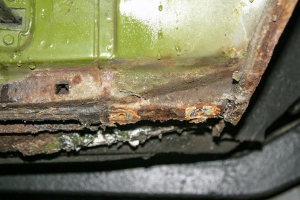 Well, one could easily fix this with a pot of filler and some glass fibre.. but wait, no. I think  that both me and the Ro80 are past the age of bricolage. So off with the wings! My fellows of the Ro80 club  suggested to open the normal solder joint at the front end of the wings – but there was none? My heart misgave me. Later in the process we found fragments of the solder joints, hidden behind an artistic construction of filler and little steel plates… At least the front ends of the sills, albeit corroded, looked better than suspected. Similarly the condition of the inner wings and partition walls placated us. 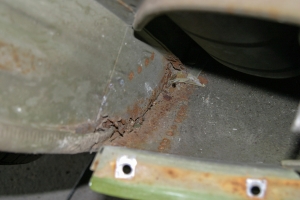 Nevertheless, the poor Ro80 had unfortunatley not been spared from so-called “repairs”. Long line of welding spots spoilt parts of the lower body. Inthe front wheel arches, an area that had already been constructed as a double-plated rust spot had simlye been tripled. Which of course helped to nurture corrosion even better. No idea why it had been done lik ethat, as a proper repair would not have been that much more difficult. So out with the rusty “repair” plates… 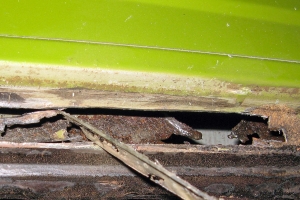 The chassis of the Ro80 had allegedly been constructed by bridge construction engineers, thus being extremely solid. There are reports of cars with completely rotten sills which drove with no discernible difference. Putting one wheel on the kerbstone and trying top open and close all doors? Many corroded cars might fail this test, but not a Ro80! Anyway, a look into the openend rear ends of teh sills showed that the bridge builders from the Neckarsulm factory needed some urgent help. The ravages of time had taken their toll. 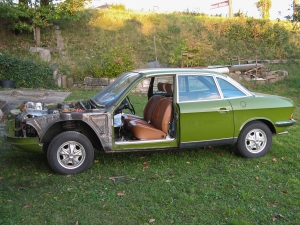 What did Goethe’s “apprentice of the sorcerer” say? “The spirits that I’ve cited...” The point of no return had been passed, so a proper job – or none – had to be done. Many hours of working with angle grinder and wire brush and lots of ellbow grease followed. The Ro80’s front end want back to bare metal as the factory hald built it. A dram of rust primer ended teh preparation phase, leaving the corroded and filled bits and pieces on the garage floor. Work would have been much easier but for the botched repairs… At that stage I had reached the limits of my technical skills.

So we temporarily assembled the car again and carried it on a trailer to a trustworthy and capable garage some 130 miles away. The owner offered me an acceptable repair price if I was patient enough to wait for idle periods, to which I agreed. Unfortunately for me – but good for him – the garage didn’t seem to experience any shortage of orders. Hence it took more than one year until I finally received the liberating phone call: “You can come and pick up your car!“. 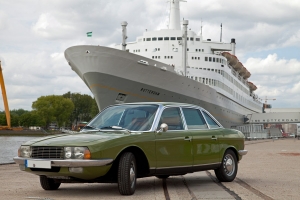 Having gained a lot of experience (and having paid a lot of Euros) I was finally again at the wheel. There it was again, that wonderful turbine-like engine sound… and the car felt like enjoying the weight reduction from removing surplus metal, corrosion and filler. Soon we took the Ro80 on a longer tour, this time to Rotterdam in the Netherlands. Dusty rust and hours with the wire brush were forgotten. The next 40 years can come…

Picture gallery (to open click on the thumb nails)